Visit all my posts from England, Wales and Scotland

Unravel the mysteries of Stonehenge; wonder at the beauty of majestic Bath Spa

Before I left for the United Kingdom, I was terrified. My mind rattled with questions about nearly everything. Would I catch my plane? Would I get on the right train? Would I end up on the wrong plane, heading for Saskatchewan?

Luckily, none of those things happened. Though I have traveled with my family before, my trip to the United Kingdom would be my first trip outside Canada on my own. It’s easy to see why traveling solo would cause some jitters.

After nearly a twelve hour plane ride, my adventure began in Glasgow where our plane landed randomly. Sitting around a Scottish airport listening to a funny security guard was a great way to start my trip across Great Britain.

Finally having arrived in England, I was so worried that I was standing in the wrong line at customs and then the arrivals line caused me difficulty. Not boding well for my trip. Finally, I learned I had to face my first nemesis. The train boards.

Guard the secrets of Chepstow Castle; wonder at the majesty of Tintern Abbey

On my way to Chepstow, South Wales, I was unaware that the train line was under construction. My perfectly laid out train schedule was now useless and I hopped on a train to Gloucester. I pronounced it wrong and had a lesson in English pronunciation from a train conductor. Thanks!

Pulling into Chepstow station, the Welsh name, Cas-Gwent, kind of threw me off balance and I knew that I had stepped into a country that had kept its identity intact for centuries. After stopping off at my bed and breakfast, I hopped the bus to Tintern Abbey, the beautiful Cistercian monastary that had been destroyed during King Henry VIII’s Dissolution of the Monasteries.

The ruined cathedral is situated in a stunningly green valley and the site itself was nothing short of fantastic. Light streamed through the old windows and moss–studded with little white flowers–coated the once hallowed grounds. Literally, I peered through every window and walked around the entire abbey.

Enjoy my posts from Conwy Castle and Caernarvon Castle

From the Victorian seaside resort town of Llandudno, one can see the stunning 14th century castle that crowns the medieval town of Conwy across the river. Due to the fact that trains do not often stop right in Conwy, travelers are known to cross the long bridge and walk into Conwy.

It just so happened that my hostel–Conwy Youth Hostel–was a fair walk across the bridge, past the castle, through the town and up the hillside. If I were ever to go back to Conwy–easily one of my favourite stops on my trip–I would find a hotel right in the city centre.

A combination of getting into town late and then walking for close to an hour back and forth from the hostel–darned check in time–almost made me miss my one opportunity to visit Conwy Castle.

I rushed down to the gates and learned that I still had an hour and a half–more than enough time to visit the castle. Conwy Castle is truly an incredible sight; built by Edward I to subjugate the Welsh in the 13th century.

I walked up every staircase, peered out of each and every one of the towers, but I was careful to make sure there weren’t any mannequins. I’m strangely terrified of mannequins.

The old city used to absolutely reek because it was once one of the filthiest European cities. With my two bags–one on my front and one on my back–I set out towards my hostel which was in a district of the city known as Grass Market. It was in this district that the population used to watch public hangings.

I left for Edinburgh Castle, took the road up the Royal Mile and feasted my eyes upon one of the most beautiful and ancient castles in Europe. Built on the volcanic outcropping, Edinburgh Castle is naturally fortified and was only captured once when Scottish soldiers climbed the rocks in the dead of night to retake their keep.

Due to the fact I had seen Edinburgh Castle on a previous trip, some of the castle’s magic had gone. Though still incredible, I enjoyed taking pictures of the Castle; for even better shots, I walked around the volcanic outcropping to the Princess Street Gardens and followed the gardens into the old graveyard underneath the castle’s gaze.

The next day, I woke up and walked three blocks to my bus stop in a confusing district called Toll Cross. Little did I know that there were at least four bus stops on each side of the road. Today, I am going to Rosslyn Chapel; some of you might remember the name from the Da Vinci Code where Mary Magdalene rested.

Having left the city of Edinburgh–sadly without my hat–I got on board the train to Stonehaven. One of the most beautiful castles in Scotland lies on the coast 10 minutes outside the village of Stonehaven.

When the train stopped, I learned that the castle was a fair ways further outside the town. The ticket agent at the train station ordered me a taxi cab who then proceeded to rip me off with his fare. Eight pounds both ways to get to a castle less than 10 minutes away. 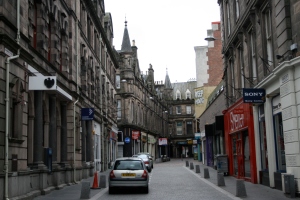 Dunnottar Castle lies on the cliffside high above the tumultous ocean; before the fortress was destroyed by Jacobite forces, it witnessed the likes of William Wallace and Oliver Cromwell’s eight month siege as he tried to regain the Honours of Scotland.

Down a steep set of stairs, the main keep lies on the crag; Much as the fortress is beautifully situated, it must have been easy to defend, but also simple to siege. Climbing the stairs up to the castle was tough with my backpacks on, but well worth the long haul.

After my first day in Inverness, buses were infrequent to Culloden Battlefield on Sundays and I booked my Loch Ness tour through Jacobite Tours instead of waiting for buses all day long. That same day, the loch tour bus dropped us off at a pier where I boarded the Jacobite Legend and set out onto the Loch.

Walk the medieval walls of Berwick-Upon-Tweed; visit the ruined priory at Lindisfarne

I got up, packed my things, left my hostel room key at reception and left for Berwick-Upon-Tweed back in England. The train from Inverness to Edinburgh was four hours long. Once I was in the Scottish capital, it was easy to find my connection.

I’m getting pretty good at reading the train boards and knowing what train and what carriage to be on in order to get to my destination. Having arrrived in Berwick-Upon-Tweed, I dropped my bag off at Miranda’s Guest House and set off to walk along the 16th century walls built by Queen Elizabeth I.

The enormous earthwork walls surrounding the entire medieval town are some of the oldest found anywhere in Britain. The magnificent walls started with a series of well fortified earthworks and finished with walls overlooking the seaside.

After finishing my mile walk along the walls, I checked the tide tables for my trip out to Holy Island and the Lindisfarne Abbey. Holy Island, known also as Lindisfarne, is one of the earliest known Christain sites in Great Britain.

In order to visit the island off the coast of Berwick-Upon-Tweed, one has to understand the tide tables because the ocean will flood the road at high tide. Travelers have been known to get stranded on the island, taking an impromptu stay at the Lindisfarne Hotel.

Travel through history to Roman, Viking York; gaze up at the majestic York Minster 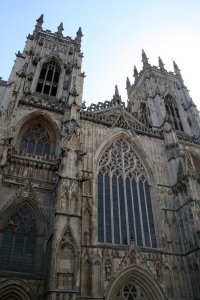 When my train trundled into York station, I enjoyed my first walk through town and stopped and watched traffic entering and exiting the bar, which means gate for the Vikings who once called this city home. I was pleasantly surprised to find that my hostel, Ace York, was in a renovated 18th century townhouse well known for its original beauty.

Hostel travelers, the Ace York is in a central location and beautifully renovated. In addition, the staff is friendly and helpful with any questions about the historic city.

Setting out along the walls of York, the ancient Minster loomed in the distance and made for some incredible photos; though beautiful to look upon, the cathedral felt even more breathtaking when the bells tolled. For those who saw the cathedral built 1,000 years ago, it would be just as majestic as it is today.

Mind the gap on the London Underground; take in the culture of the nation’s capital

Enjoying my final morning in York, I slowly made my way to the train station and caught my connection into London’s King’s Cross Station. Sadly, despite many attempts to ask people where platform 9 and 3/4 existed, nobody could tell me where the fake homage to Harry Potter was.

Seriously, there’s a small corner of the train station where a trolley is disappearing into the wall. Great for one of those goofy tourism photos.

Instead of being helpful, tourism information officers looked at me as if I was an idiot who believed the platform actually existed. From King’s Cross, I stepped into the Tube station and quickly learned that maintenance crews were doing weekend work on the train lines. Sigh.

For someone who had only been on the London Underground once (and didn’t pay attention), I was thrown into one of the first serious “problems” of my trip. As much as I needed to know how to get to my hostel, I was worried I wouldn’t be able to see all London’s attractions. That would quickly fade away as there are other ways to get to the main sights.

After asking an unhelpful Tube guard how I should get to Great Portland Street, the answer was that I was to find a bus that would take me there. Some people are so incredibly helpful.

When looking at my Tube map every which way, I soon realized I could ride a different line to my stop and then have to walk an extra two blocks to YHA Central London youth hostel. On arrival, once again, I was too early for check in and left my bag in a downstairs storage closet along with almost a hundred other bags.

Back at the Tube station, some quick route adjustments had me on my train heading towards Trafalgar Square. Alas, the famous square crowned by the Nelson Column was way to busy for my enjoyment and I snapped what pictures I needed and started walking towards the old district of Westminster where I saw Big Ben and the Houses of Parliament.

Mind the Gap on the London Underground

Bath Spa – – – Unravel the mysteries of Stonehenge; wonder at the beauty of majestic Bath Spa

Chepstow – – – Guard the secrets of Chepstow Castle; wonder at the majesty of Tintern Abbey

York – – – Travel through history to Roman, Viking York; gaze up at the majestic York Minster

London, England – – – Mind the gap on the London Underground; take in the culture of the nation’s capital