Tourists must visit Edinburgh’s Greyfriars Kirkyard. It’s one of the most incredible, but spookiest places I have ever been. For those who believe in ghosts or don’t, it’s an eerie place. Still to this day, I am unable to explain why I felt the way I did while visiting.

Even as most tours of Greyfriars include a visit to the city’s famed underground vaults, one has to return to the cemetery during the day to fully understand its significance and history.

During my visit to Edinburgh Scotland, I was excited about joining one of the city’s famed ghost tours, but I was extremely nervous, because, well, I don’t like being scared. At all.

But, I’m not one to miss out on something that could be potentially amazing. Yes, this is an amazing addition to anyone’s trip to Scotland, especially if touring this historic city.

After summoning my courage, I booked my ghost tour to two of the scariest places on Earth, the first being Greyfriars Kirkyard and the second, the city’s underground vaults.

Our guide got right into the spirit and was cloaked in a long robe.

In his hand, he held an old-fashioned lantern. Together, our group walked through the streets past people celebrating in pubs. We stopped at a locked gate.

Behind it was a dark passage leading underground. What have I done, I thought.

Unknown to many, the city of Edinburgh has a vast network of underground vaults, many dating back to a dark time for the downtrodden, the 18th and 19th centuries.

The poorest of the poor once lived among these tunnels. Crime and disease ran rampant and the elite heard grisly tales from the depths of these passageways.

Serial killers Burke and Hare might have kept their bodies in the tunnels.

Now, ghost tours are offered. Many people believe they feel the spirits of those who once lived within the dark underworld that was the pit of hell to many. Great, I moaned.

At one point, I lagged behind to take a photograph, but quickly felt a shiver go up my spine. I hustled to catch back up with the group. I learned my lesson quickly.

The spirits could get someone else, but not this wary traveller.

We finished the underground vaults, which was a thrill and a relief and carried onto the gates of Greyfriars Kirkyard, a cemetery that dates to the late 16th century.

Under the cover of darkness, we learned the story of Mackenzie’s poltergeist.

Sir George Mackenzie is known as Bloody Mackenzie for his role in the imprisonment and execution of Scottish Covenanters after the battle of Bothwell Bridge.

Nearly 1,200 were led to a field beside Greyfriars Kirkyard. 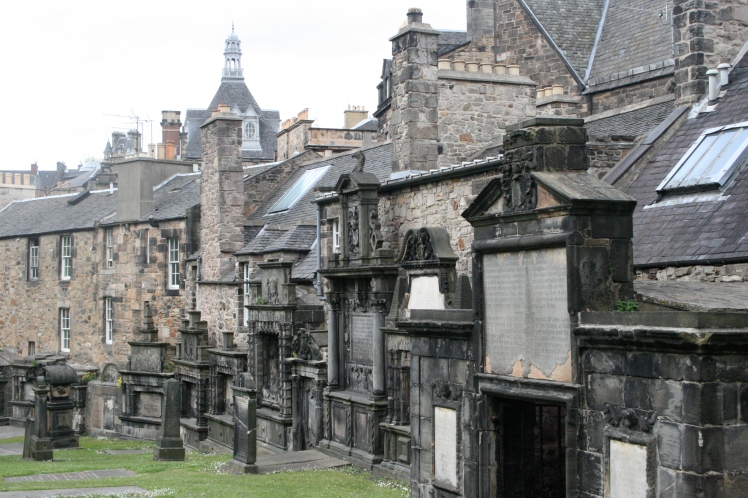 The area in the graveyard called Covenanter’s Prison has been closed by the city thanks to alleged attacks people have faced including bruises, bites, scratches and black outs.

Three hundred and fifty incidents have been reported between 1990 and 2006. No matter if you believe these stories or not, Greyfriars Kirkyard can be a terrifying place.

While you learn this story by candlelight, you are led into the ‘prison’ and into an open tomb. Your guide has a key to the locked area. We stood in a  tomb at midnight.

It’s not my finest hour, but I did situate myself in the middle of the group at all times. I did not want to be the first one picked off by an angry poltergeist, if he proved to be real.

Even at that time, I wanted to come back to the graveyard the next day to take photographs. But, I wanted to do so at dusk to ensure I took the best possible pictures.

After a full day of touring Edinburgh, I returned to the graveyard as evening fell.

More than a bit worried about stepping back into the cemetery, I scared up courage over a plate of fish and chips and reminded myself it was where Greyfriar’s Bobby came about.

Now in front of the gates, they creaked as I opened them. Inside, the tombs were a grim sight. They are stained black with soot from the Industrial Revolution.

But, the iconography on the tombs is weirder still to the point of being off-putting. Dancing skeletons, images of babies resting on bones and stone guards of Death.

Even today as I write this post, I know I’ve never felt this way before. I felt like I did not belong and that somebody or something wanted me gone. Yet, I continued on.

Some of the graves are covered with bars erected in the 19th century to ward off grave robbers, many of these being people who stole bodies to conduct medical experiments.

Interestingly, J.K. Rowling took the name Tom Riddle from one of the tombs to create the darkest wizard himself, Lord Voldemort. A strange, but amazing connection for sure.

At the end of the churchyard was Mackenzie’s tomb. Now that I knew his story and his interest in harming the living, I have his resting place a wide berth.

Unlike some who visit the graveyard, I was not attacked by any poltergeist, but I did feel incredibly weird walking alone through the churchyard. I’m sure I’m not the only one.

Greyfriars Kirkyard is a must see attraction for anyone visiting the city, even if you are a scaredy-cat like me.